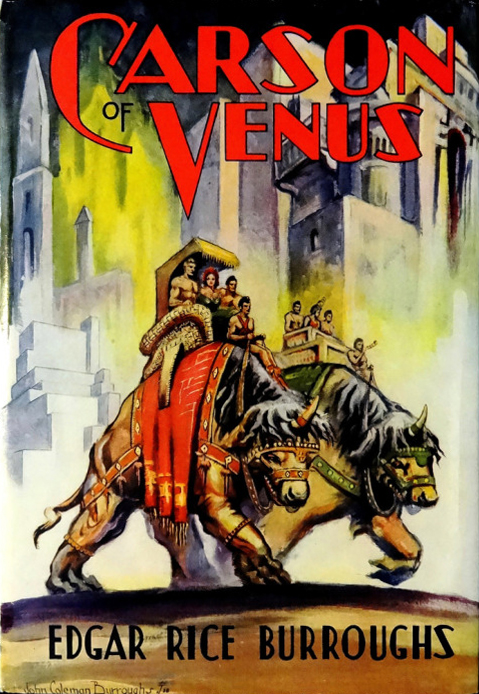 “Carson of Venus is Edgar Rice Burroughs’ third of four novels in the Venus series. They follow the fantastic adventures of earthman Carson Napier after he crash lands on Venus… This third book was written two years before the outbreak of World War II. So, it focuses on spies, intrigue and war and satirizes the Nazis and the Fascists… Illustrations for the novel were supplied by the author’s son, John Coleman Burroughs.”

In 1939 Burroughs was living on his estate in Tarzana in the San Fernando Valley. The area was named after Burroughs’ fictional character when a post office was built to serve residents on land subdivided from portions of his holdings. The story is a bit complicated so read about it here: http://www.tarzana.ca/ and here: http://www.erbzine.com/mag0/0008.html . Tarzana was never an actual political entity, it was just a postal designation for an area within the city of Los Angeles. Your blogger grew up in Tarzana about a half mile from what was, by then, the home that Burroughs formerly resided in.