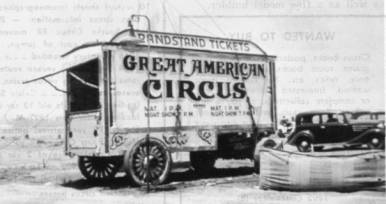 Image:  Ticket wagon of the 1939 Great American Circus. From Vol. 11, No. 6 (Nov-Dec), 1967 Bandwagon, magazine of the Circus Historical Society (see excerpt link below).

The Great American Circus was hastily assembled in southern California and lasted a little more than a year. Here is a greatly condensed description:

“In early 1939, Fanchon and Marco were approached by Charles Nelson, an agent, with the idea of establishing a tented circus.

“When the go ahead was finally received three or four commercial painting crews attacked the equipment with spray guns. Everything was painted orange and as soon as the paint was tacky it was lettered with the Great American Circus title in blue and white on the orange body. The show moved out of quarters [in Baldwin Park*] on Sunday for Inglewood, with Arthur still doing lettering. Every time the train stopped for a moment, he would jump out, and paint a couple of more letters, and thus the Great American Circus was painted on the move.

“It is very hard to relate the next five days of the show’s existence, without first understanding the many handicaps they suffered. When you realize that the whole show was framed in less than five days, you can begin to see the problems. To begin with, there was no working labor, and those that were there had no idea of what they were doing. How does one explain circus logistics to a working man, who has never seen a stake or jack before in his life, let alone when you’re on the road, and moving it every night. The show opened in Inglewood, California on May 24th, 1939 under the auspices of the Inglewood Parent-Teachers Association, after two days of moving the show on the lot.

“It was felt that had the show lasted through the Southern California dates [in 1940], it would have been a real winner. The show was just beginning to pick up the additional working men they needed, and the advance ticket sales for the future dates were great.”

Excerpts from Bandwagon, Vol. 11, No. 6 (Nov-Dec), 1967 http://www.circushistory.org/Bandwagon/bw-1967Nov.htm . Click on the link for the full story and more photos. The Circus Historical Society does not guarantee the accuracy of information contained in the information in these online articles. Information should always be checked with additional sources.