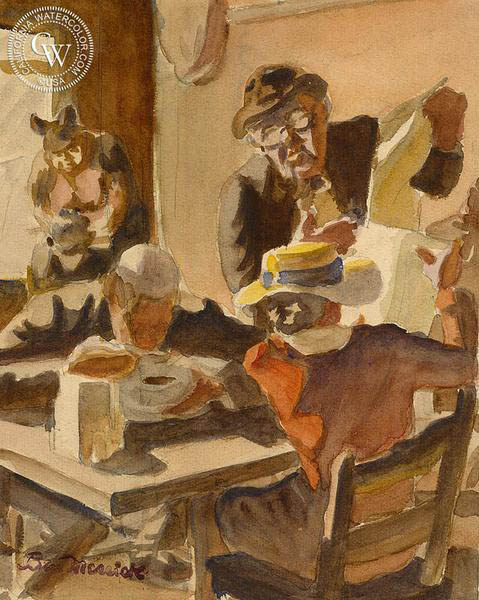 Los Angeles County Museum of Art description (from the link below):

A man shares a newspaper with a faceless woman while an elderly gentleman hungrily slurps his soup in a sparsely furnished restaurant. Main Street Cafe Society is painted in a palette of earth tones. Color was essential to Messick for conveying the mood of his scenes, and he usually selected a restricted color scheme for each painting. While the browns and beiges of this painting bespeak a poor and spare life, the overall pink cast of the palette suggests a positive, almost rosy attitude toward it. Messick also believed a good composition should move rhythmically, and in Main Street Cafe Society the viewer proceeds through the scene by means of fluid lines and alternating areas of light and dark.

“Ben Messick (1901-1981) Born: Strafford, MO; Studied: Chouinard Art Institute (Los Angeles); Member: California Art Club… By the mid-1930s, he had developed his own style of painting and became known as one of the West Coast’s key Regionalist artists. While Messick was an extremely competent watercolorist, these works were not exhibited frequently and did not receive the attention given to his oils on canvas.”

Image and excerpts from https://www.californiawatercolor.com/collections/ben-messick/products/ben-messick-art-main-street-cafe-society-c-1939 .