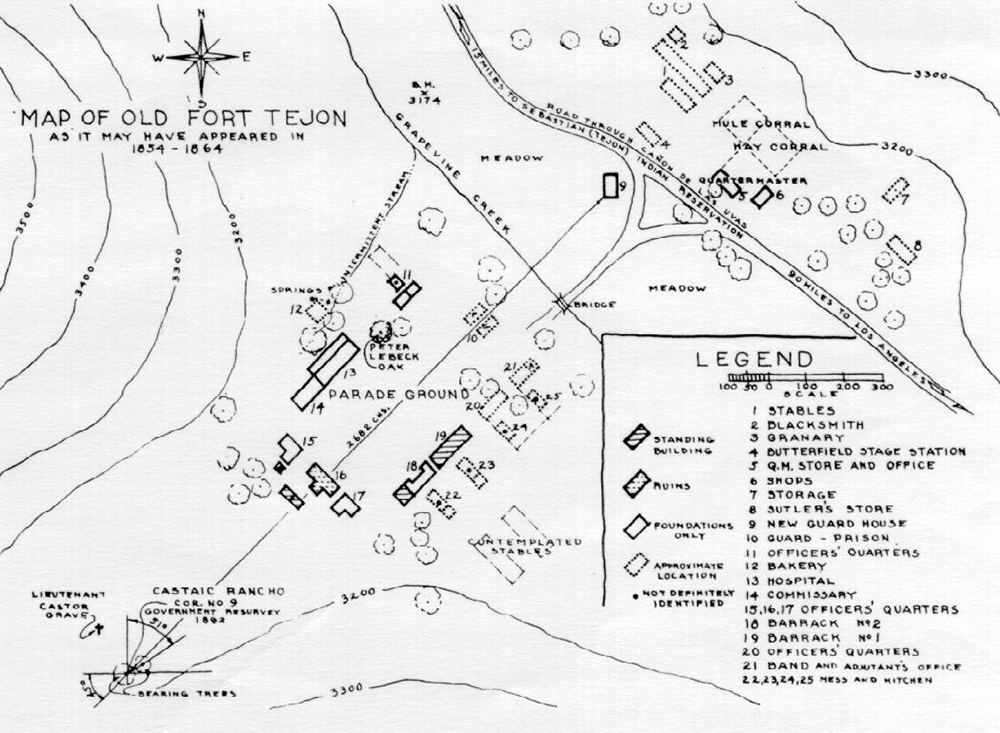 “Fort Tejon was established on August 10, 1854 at a point in the Tejon Pass where the Coast Range meets the Sierra Nevada and about three miles north from the present Lebec Station…  It continued to be occupied until June 15, 1861 when its regular garrison was removed for transfer to the east. It was reoccupied by California Volunteers from August 17, 1863 to September 11, 1864, when, with the final removal of the Native Americans from Tejon Pass to the Tule River Reserve, it was abandoned…  The military reservation and its 25 structures then became a part of the Rancho Tejon, a Mexican Land Grant, purchased by Lieutenant Beale, who eventually increased his holdings to nearly 200,000 acres. Part of Fort Tejon’s site is now a State Historical Monument under the California Beaches and Parks System. It was deeded to the State in 1939 by Rancho Tejon.

“At Fort Tejon, camels were NOT an essential element of the Fort’s history. Camels were at the Fort for only 5-1/2 months, from Nov. 17, 1859 to mid April 1860. The camels were never used by the soldiers at Fort Tejon. They were government property and were kept here only a short time during the winter of 1859/60 before being moved to the Los Angeles Quartermaster Depot on their way to Benicia where they were auctioned off at a loss to the Government in 1864.”

“A traffic engineer of the [California] Division of Highways gives the information that 1,750,000 automobiles passed over this route [at Fort Tejon] in 1939…

Excerpt from https://scvhistory.com/scvhistory/cullimore_oldadobes.htm . Read about the old adobes on the site at the link.