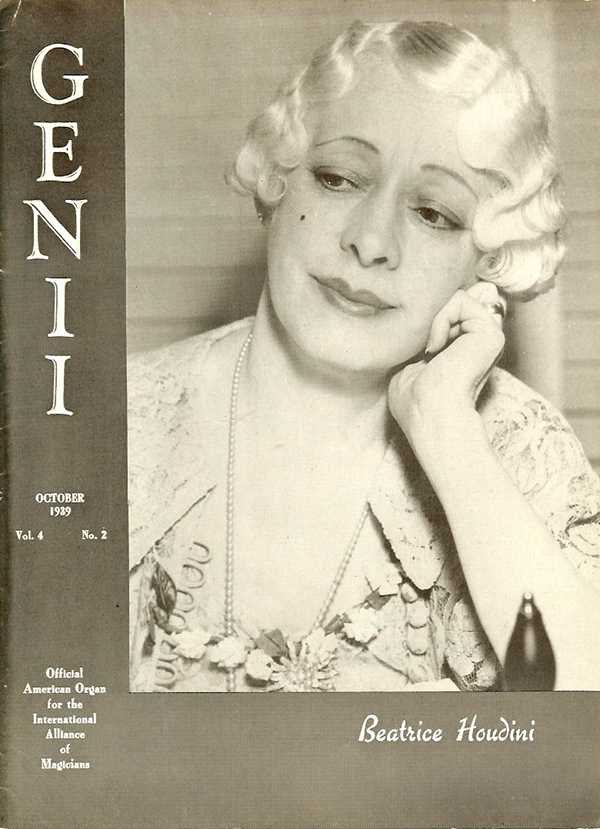 “Genii was originally conceived as a magic magazine devoted to West Coast magic news, and Bess Houdini was a huge part of the West Coast magic scene and a source of great pride for the magic community.”

From the Genii article at the link:

“In all the world there is no more staunch supporter of magic than is Mrs. Harry Houdini, widow of then late great magician and escape artist. […] Mrs. Houdini has lived in New York, Florida and California. She is now a frequent visitor to the first mentioned states. But we claim her, here, as our own. Her home, beautifully situated on one of the finest, widest streets in Los Angeles, is a mecca for local magicians; for out of town conjurers when they visit Southern California. It is there that Beatrice Houdini presides as the fist lady of Magicdom. Is is there that conjuring men can go and talk, and live over again the grand, mighty days of the glorious past. […] Houdini made his name mighty and powerful. Mrs. Houdini has made it lovable and charming. […] Hail the Queen of Mystery — Mrs. Harry Houdini!”

“[Harry] Houdini and Bess promised each other that whoever died first would try to contact the other ‘from the other side.’

“After Houdini died in 1926, Bess began the tradition of holding a séance on the death anniversary to see whether Houdini, the Man No Jail Could Hold, could indeed escape from death. These séances, of course, provided rich publicity, and Bess was dedicated to promoting the Houdini name.

“In 1936, the ‘Final Séance’ was held on the roof of the Knickerbocker Hotel in Los Angeles. Ten years was enough, and Bess admitted that she had never received the message from Houdini.

“But that was not the actual final séance. The magic fraternity quickly took on the task of conducting the annual séances, with numerous notable magicians heading the table, including Walter Gibson, Houdini’s ghostwriter.

“Despite all of the effort, attention and interest, Houdini has apparently not spoken to anyone since he breathed his last earthly words to his brother Hardeen on Halloween night in 1926.”