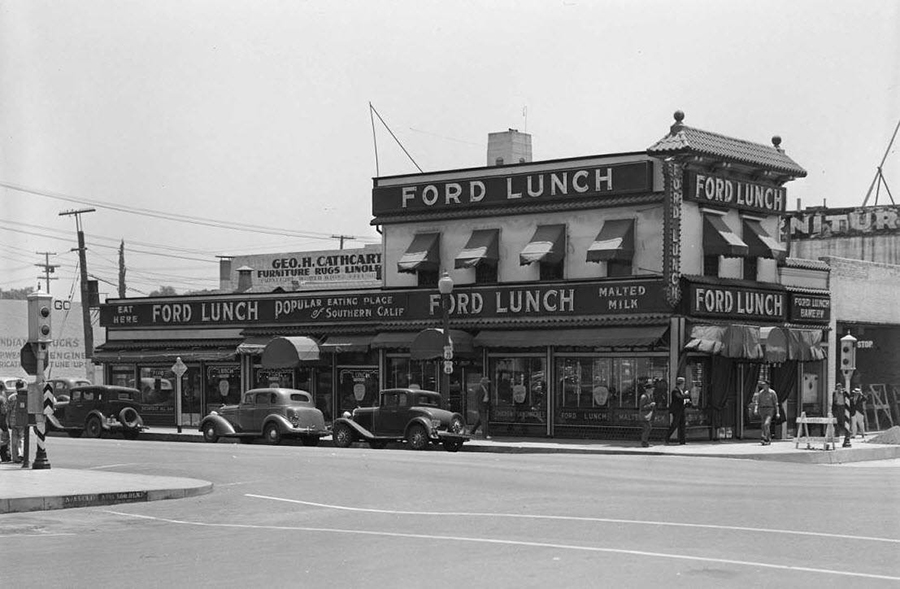 Image: undated photo from unknown source. It appears to be in the mid to late ’30s based on the automobiles.

“It was right near the corner of Euclid and Holt [in Ontario] on the same side as the Yanzee Chinese Restaurant.

“Anyway, the owner of Ford’s was one nefarious guy named Frank Holbart, (The Restaurant was named for Ford Cars) was also known as the guy who refused to serve actress Mae West when she was making a movie in the area….something about her movies being to[o] racy.”

“Ford Lunch had a reputation for racial discrimination, so my parents never took us there to eat.” This was a comment from reader Linda (Shaffer) Frost responding to an earlier newspaper column quoting memories of Jim Bowman growing up in Ontario.
Excerpt from http://www.insidesocal.com/davidallen/2009/06/19/since-i-am-waxing/ .

“One customer [of newsboy Victor Murillo Ruiz] was the owner of the fabled Ford Lunch, a restaurant on the southeast corner, which wasn’t exactly a welcome place. It had a sign, according to Ruiz, that said Mexicans and blacks (though in less diplomatic terms) were not allowed there. To deliver his paper, he was permitted to go inside, but with only one foot.
“I was supposed to leave the paper on the top where the cash register was at,” he said. “I would get paid from the girl, one foot in the door. Reach out and get the money, walk out and go back to my corner.”
Excerpt from http://www.dailybulletin.com/2017/05/08/recalling-ontarios-racist-past/ .