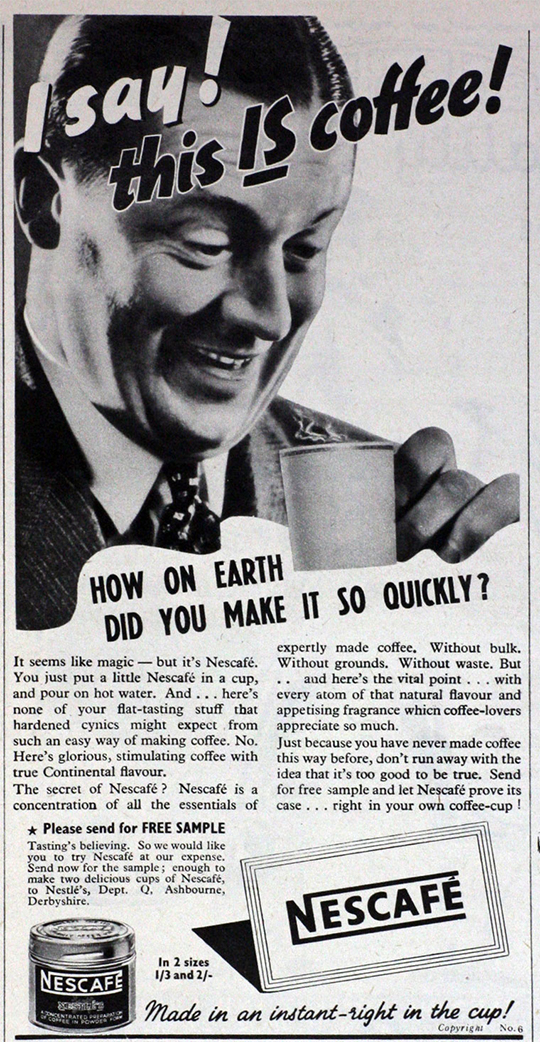 Nescafé was rolled out in UK and USA. It was first available in Europe a few years earlier. We couldn’t find a 1939 era U.S. ad.

Various kinds of instant coffee were developed as long ago as 1771. The process developed to make Nescafé in the late ’30s became widely popular because of taste improvement. Learn more at http://www.historyofcoffee.net/coffee-history/instant-coffee-history/ .

Image: detail of a Pepsi-Cola brochure from http://www.vintagevending.com/pepsi-cola-brochure-at-retroplanet .

In 1939 Pepsi-Cola began using the “Twice as Much for a Nickel” slogan.*

“Walter S. Mack… used a court fight and an incessant radio jingle to transform the little-known Pepsi-Cola Co. into one of the nation’s two largest-selling soft-drink makers…

“Mack became Pepsi’s president in 1938, when the company was spun off from a New York candy maker, Loft’s Inc. At that time, Pepsi was selling a syrup developed by a North Carolina druggist at the turn of the century. But Pepsi made little headway against Coca-Cola until Mack took away Coke’s control of the name “cola” in a historic court battle.”

An article about a Pepsi-Cola bottler promising to open in Santa Ana appeared in the Santa Ana Register newspaper on September 16, 1939.

* from https://www.slideshare.net/christinaamalan/pepsi-advertising-strategy . Click on the link to learn more about the company’s advertising strategy.

“In 1939 Acme commissioned George Petty (who had just left Esquire magazine) to paint three lithesome gals which were used for the 1940, ’41, and ’43 campaigns. These images were utilized in a number of different formats. They produced a 26″ and a 33″ wide, framed image for wall hanging; a 12″ wide, framed version on an easel for back-bar display; and a cutout window card that was 42″ long and easel mounted for window displays.”

Excerpt and image from http://brewerygems.com/acme.htm . Click on the link to learn more.